Garfield is not the only fat cat around. 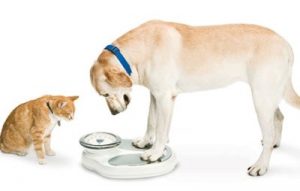 According to the Association for Pet Obesity Prevention, more than 50 percent of the nation’s cats and dogs are overweight. And just as concerning, more than 90 percent of their owners don’t recognize that their pet is carrying around extra pounds.

Ward founded the organization in 2005 after realizing that many veterinarians were not talking to pet owners about obesity. Ten years later, he says, vets are finally having those necessary conversations.

“It’s an emotional land mine,” Ward says. “You don’t know when you’re going to step on the wrong button because people inherently have a problem with questions (about how they’re) feeding pets because we equate love with food and treats.”

Not unlike humans, pets can face obesity because of too much food and too little exercise, says Eve Flores, a veterinarian and co-owner of DTLAvets with Leia Castaneda.

Overweight animals are more prone to a host of health conditions, including arthritis, high blood pressure and blindness.

Below are some suggestions from Ward, Flores and Castaneda for pet owners looking to improve pets’ health:

Many pet owners do not take their dogs or cats to the veterinarian until something is wrong. “We can’t practice preventive medicine if we’re not seeing the pets,” Flores says.

Pets should be seen by the veterinarian at least once a year for the doctor to evaluate the animals — and educate the owners.

“The most important decision a pet owner makes every day is what they feed their pet,” Ward says.

Flores encourages pet owners to look at the ingredients listed on food packages. If any of the first three items is unpronounceable or hard to understand, don’t buy it.

“Pay attention to the amount you’re actually feeding your dog,” Castaneda says, adding that owners should be aware that treats have calories too. She also says that diet food and pet foods that are grain-free or raw have become marketing tools more than healthful alternatives.

Ward uses a simple equation to get through to his clients: “Fat equals inflammation, which equals disease which equals early death.” To avoid that, exercise is a must, he says. “It is as simple as walking your dog 30 minutes a day, interacting with your cat for five minutes three times a day.”

Flores adds that extending normal walking or play times by 10 minutes can do the trick.